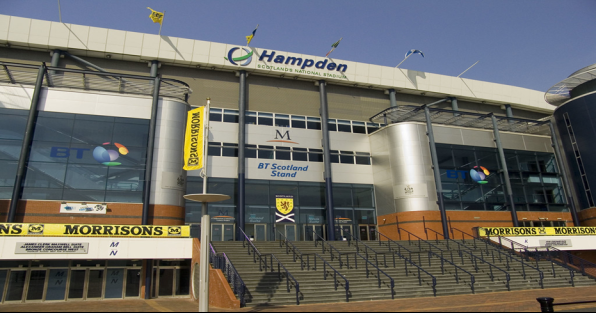 “Boris Johnson launch of COP26” by UK Prime Minister is licensed with CC BY-NC-ND 2.0. To view a copy of this license, visit https://creativecommons.org/licenses/by-nc-nd/2.0/

Thanks to COP26, Scottish football has now announced what it is aiming to do to help tackle climate change.

The Scottish Professional Football League (SPFL) and the Scottish Football Association (SFA) released a joint statement during the Glasgow conference with a number of ways to show how the game will be moving in a greener direction.

However, one team which is based in the fourth tier of the English professional leagues has been at the top of the eco division for a while now.

The club based in Gloucestershire, England, installed many environmentally friendly features to their stadium including solar panels, electric car charging points, water recycling, an electric lawnmower, an organic pitch, and an vegan only menu for players and fans. Other ‘green’ highlights:

The entire club is powered by 100% green energy from Ecotricity, some of which they generate themselves with the solar panels on the stadium roof and the solar tracker at the ground entrance.

“The New Lawn Stadium” by joncandy is licensed with CC BY-SA 2.0. To view a copy of this license, visit https://creativecommons.org/licenses/by-sa/2.0/

The grass the club play on is sustainable, free from pesticides and weed killers, and they cut the grass with a GPS-directed, solar-powered lawnmower.

They also collect rainwater that lands on the terrace stands and use it to irrigate the pitch rather than using mains water.

“Hampden Park” by raymccrae is licensed with CC BY 2.0. To view a copy of this license, visit https://creativecommons.org/licenses/by/2.0/

Last week, the SPFL and SFA released a joint statement on the state of the how our beautiful game can become kinder on the environment.

“As the governing body, the Scottish FA has recently published its best practice guidelines, Environmental Sustainability in Scottish Football, and will commit to even more stringent measures as part of its new strategy, The Power of Scottish Football, over the next decade.”

“The Scottish FA has made significant improvements to the stadium as part of its co-hosting of UEFA EURO 2020 which have included: