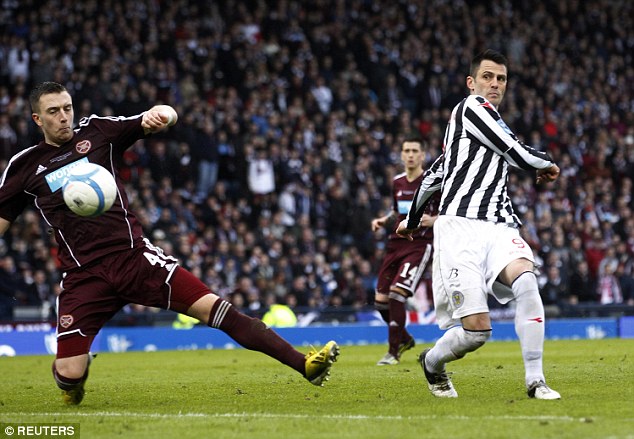 Steven Thompson believes that he completed his own fairy tale story with St Mirren seven years ago today, netting in the Scottish League Cup final against Hearts.

Thompson lead his side to their first trophy in a generation, taking an opportunity he thought he’d never have and revealed that he was in the crowd when Ian Ferguson lead the club to Scottish Cup glory 25 years earlier.

Thommo looked back on what he calls the proudest moment of his career, exclusively with the New Paisley magazine.

“It doesn’t get much better than scoring a goal for your boyhood club, at Hampden in a cup final and then go on to lift it.

“I think growing up in Houston and obviously being born in Paisley as well, I never imagined getting the chance to play in a cup final anyway.

“To play in a cup final for your local team, the team you grew up supporting, it really was the stuff of fairy tales.

“It probably was my proudest moment in football, out with getting my first Scotland cap.

“It was an amazing achievement by everyone at the club, the squad and the staff because St Mirren don’t win trophies very often.

“So to have that and to then etch your mark on the club forever more and to have my own bit of history there is something that I’m really proud of.

“It makes it even better, because it was the first time that we’d ever won the league cup, I was there at Hampden for the 1987 Scottish Cup win.

“I was only nine, and that was 25 years before we won that so it was it all kind of went full circle for me.

“In terms of the run that we went on to get to the cup final, it wasn’t easy in the slightest.

“To go away to Aberdeen in the quarter-finals and get a victory up there on penalties, with Sammy (Craig Samson) pulling off a couple of worldies in the shootout.

“Like as the chairman reacted to when we got Celtic in the Semi-Final, we knew it was going to be really tough, and to beat Celtic at any time, you really have to have everyone in your team at their maximum level of performance on the day, it’s very difficult to do but we managed to do it.

“I think every single player who played that day, individually reached their maximum and I’ve said it before, I think that Semi-Final was one of the best performances I’ve seen from a St Mirren side, possibly ever.

“Once we’d won that and navigated Celtic, I had a really strong feeling that we’d win the final and it turned out to be that way.”

The St Mirren stalwart revealed that the memories of Ian Ferguson’s winner in 1987 were still vivid in his mind as he walked out onto the Hampden turf.

He relived every minute of emotion he experienced as a fan 25 years previous and more as he lived the childhood dream of many from Paisley and surrounding areas.

“I was definitely more nervous playing in a final than watching one, but my memories of ’87 are of me actually being quite intimidated, because I’d never been to a game of that scale before.

“They had gates up around the pitch to stop fans from getting on to the park, but when St Mirren scored, it was just that incredible rush of people going forward and I was quite near to the front, so it was incredible.

“I remember Ian Ferguson’s goal as if it was yesterday, so to go and do that in a final yourself, is just incredible really.”

Next post “I worry that there are people who won’t survive the loneliness.” – Scots share their experiences of the Coronavirus pandemic