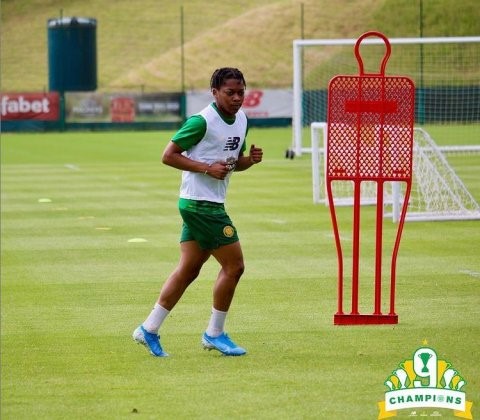 The 17 year old came on as a sub on Monday night’s draw against Hibs.

However, he’s failed to make any sort of impact since appearing for Celtic’s under 20’s when he was only 13.

The winger’s contract ends at the end of the season and as of yet, we don’t know what the holdup is,  whether it is from Celtic’s or Dembele’s side.

Dembele has attracted attention from Europe’s elite with Borussia Dortmund, Barcelona and Real Madrid keeping tabs on him, according to Spanish magazine Don Balon.

Due to Dembele being under-23 he cannot move on a pre-contract but could still move at the end of the season for only a development fee.

Celtic are no strangers to development fees, even utilising it to sign fan favourite Moussa Dembele from Fulham.

The youngster made an appearance for the bhoys yesterday in a 1-1 draw with Hibernian taking his total minutes for the season up to 16 minutes.

The England youth team player made his debut for Celtic against Hearts on the final day of the 18/19 season with an inspiring performance showing his raw talent throughout the game.

Dembele has had limited minutes for the hoops since, with only 4 first-team appearances.

Dembele seems low on the winger pecking order for Celtic despite the East End club having little to no wingers for most of this season.

With Forrest and Johnston having had long term injuries and the departures of Shved and Morgan, Dembele has still failed to start a single game.

However, with Celtic’s latest Coronavirus crisis, now could be Dembele’s time with 13 first-team players unavailable.

Hoop’s boss Neil Lennon has commented before on the reason why Dembele hasn’t featured often for Celtic, saying:

“We just have to be careful with him and not throw him in too early.

“He may even develop physically.

“We just have to be patient, we know he is a quality player but physically he still has a bit of development to do to be part of the first-team squad,”, according to HITC.

Many of today’s world-class players like Lionel Messi and Andrew Robertson have faced this criticism at a young age with the Scotsman facing it at Celtic.

Scotland captain Robertson has said that being told that by Celtic “In a way” motivated him and he “took it on the chin and bounced back” (Source: BBC).

Family is important for young Dembele and he alluded to this when talking about about how his brother helped him get into football.

Speaking to Celtic when he signed his first professional contract, Dembele said:

“My brother Siriki, who plays for Peterborough United, first taught me how to play football.

“I wasn’t always interested in football, but he brought me in, and he helped me.

“He helps me in everything I do.