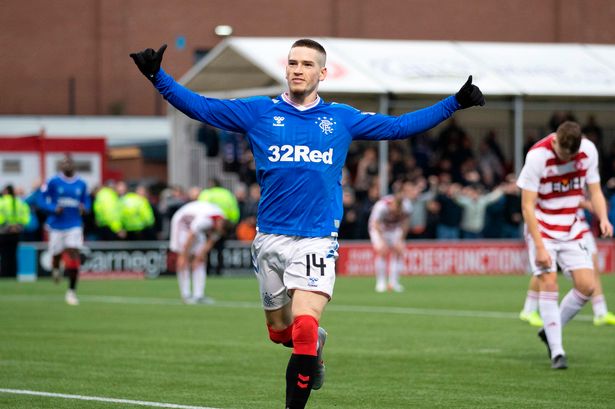 Steven Gerrard’s men travelled to the Fountain of Youth Stadium to face Hamilton who was without a win in their last six.

Southwood got the nod from manager Brian Rice to secure his first professional debut.

Rangers go into today’s game, winning seven games on the trot, and trying to maintain the pressure on rivals Celtic at the top of the table. This was another must-win game for the light blues.

Scoring his fourth goal of the season, Ryan Jack put Rangers ahead with a low, timed shot into the bottom left-hand corner beating Southwood in nets.

Accies, then equalised against the run of play, with a close-range headed effort “wonderkid” Lewis Smith, beating Rangers Skipper James Tavernier in the air.

Ryan Kent got his second spell at Rangers underway, with an excellent finish from outside the box across the keeper and into the top left-hand corner, to put rangers back In the driving seat.

That was Ryan Kent’s first goal since scoring against Celtic back in march when he was a loanee at the club after putting pen to paper in the summer for the fee of around £7m.

Hamilton were unlucky not to equalise again with a great ball from Mickel Miller Into the back post with Hunt trying to meet it, and flashing it over.

Then shortly after with all the efforts coming from the home side to equalise Oakley delivered an excellent ball across the face of the goal but Miller failed to convert the chance.

Kent, then netted his second and Rangers’ third of the game slotting it past the Accies keeper to secure all three points for the light blues.

Rangers are now unbeaten in their last eight games and maintain the pressure on rivals Celtic the top of the Scottish Premiership.