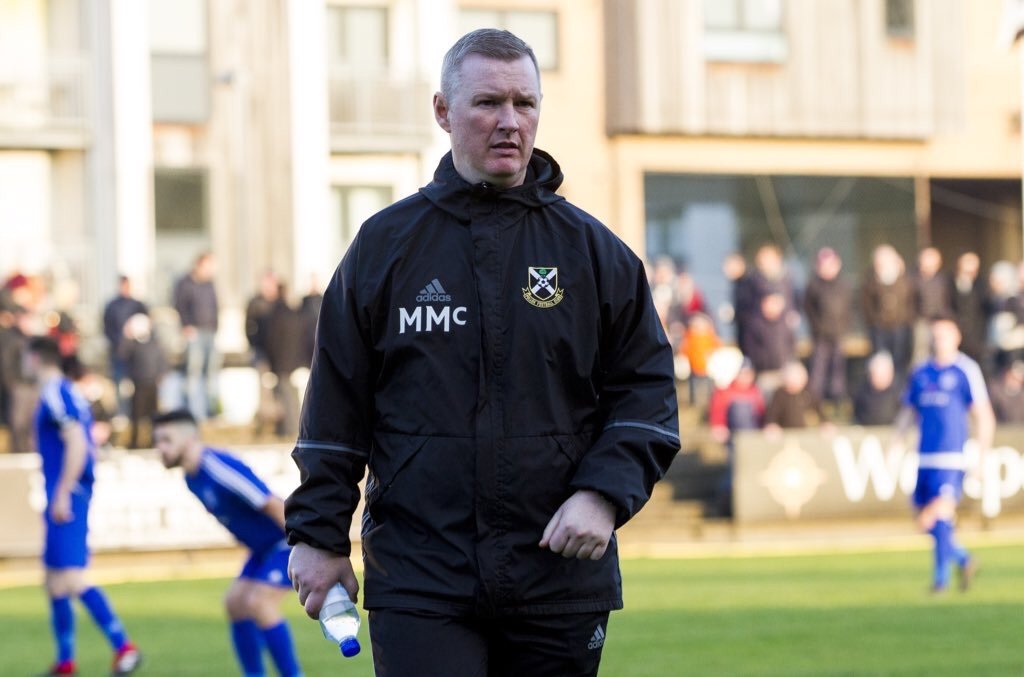 Pollok gaffer Murdie MacKinnon was delighted as a goalie Jordan Longmuir’s penalty prowess saw his side go into the hat for the 5th round of the Scottish Cup after Pollok beat Glenafton 3-0 on penalties after a 1-1 draw in normal time.

The home side took the lead in the tie after a bore draw in the fixture at Loch Park last week. Stef McCluskey converted Shaun Fraser’s neat cross from the right hand side after a cagey quarter of an hour from 4 yards out.

Glenafton equalised through Leon Murphy six minutes into the second half who met Dale Moore’s cross from the right with a fine header at the near post, flicking the ball beyond Longmuir into the bottom left hand corner to send the game to penalties.

In a period for players to make their mark. Jordan Longmuir stepped up and produced three fine saves in the shoot out. First from Mick McCann, diving to his left to firmly prevent the ball from going into the bottom corner.

Secondly from Dale Moore who’s penalty was destined from the same corner, diving fantastically to parry the ball away and finally from Darren McLean, diving low to his right to complete his penalty shut out.

This allowed Danny Mckenzie, Bryan Young and Ryan McGregor. Who fired into the top right, left and bottom right corner beyond McGarrity to send Pollok through.

Murdie MacKinnon added; “I Thought the boys were outstanding today, we played excellently in the first half, i asked the boys to go and create chances, over the course of the two games it was extremely close between two top teams. I don’t think we played as well as we could’ve second half but after Glenafton equalised we tried to get back to winning the ball but overall we could’ve done better.

“I thought over the two legs the boy’s behaved fantastically and we’re a credit to themselves. Jordan was outstanding over the two legs, firstly down in New Cumnock producing a couple of fine saves and today with a complete shut out in the shoot out. That’s why he’s one of the best in the juniors.