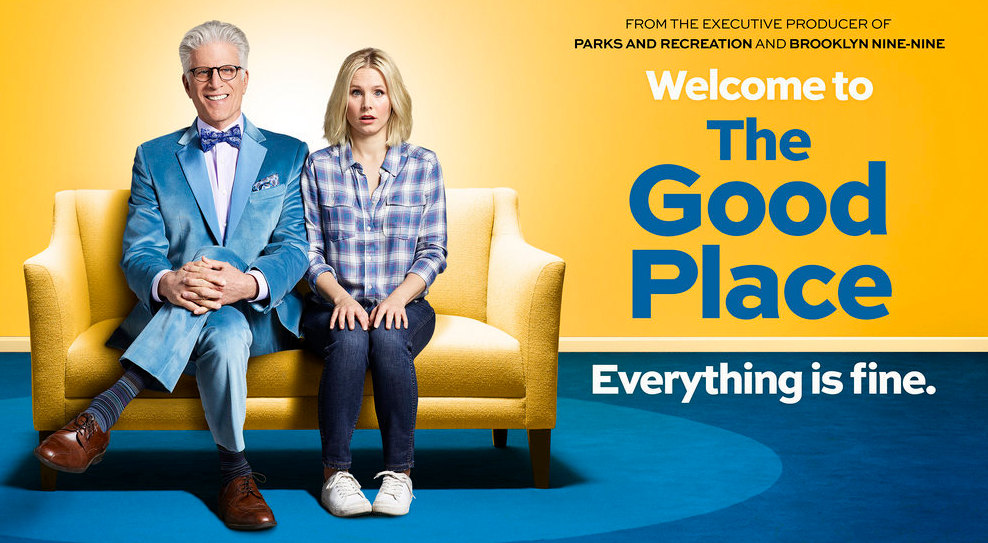 The Good Place comes back for another fit of laughter with Season 2.

The series, that first aired on NBC in 2016, focuses on Eleanor Shellstrop (Kristen Bell) who finds herself sitting on a couch after dying in a car park, a reassuring “Everything is fine” painted on the wall in front of her. She is informed that she made it to the “Good Place”, thanks to the huge impact of her good deeds in life.

Except Eleanor did none of those great, altruistic acts. She soon realises she was sent to the Good Place by mistake and she has to hide what kind of person she really is – self-absorbed and egotistic.

Every kind of catastrophe happens because of Eleanor’s misplacement and even Chidi, her new Ethics professor friend and supposed soulmate, trying to teach her how to be a good person doesn’t solve their troubles.

In the last episodes we find out that the paradise-looking neighbourhood is actually a subtle, brilliant, psychological torture concocted by Michael, who is, in fact, not an angel but a demon.

Season 1 ends with Eleanor figuring out the evil scheme, forcing Michael to reset the experiment and start again, wiping their memories.

Season 2 starts where we left off, but as the devilish plan plays out once more Eleanor figures it out again. And again. And again, for some hundreds times. Even Jason, the dim-witted wannabe DJ, gets there at some point, of course in plain Jason-like fashion, without meaning to.

Michael resets the world over and over, but somehow it never works out. He tries all the combinations, but his fellow demons are getting tired of it and one in particular wants to play by her own rules.

Vicky – who played ‘Real Eleanor’ in season 1 – believes she can do better and eventually takes over. She blackmails Michael by threatening to tell Shawn – Michael’s Boss – the truth, as he currently believes the experiment is still at its second attempt and going wonderfully.

To avoid defeat, Michael allies with the one person who seems to have it all figured out: Eleanor. Together they come up with a plan to reach the real Good Place – demon and wannabe-DJ included.

For the plan to work, the gang needs to convince Vicky that she’s doing a great job at torturing and making them feel miserable – which isn’t far from the truth, if not in a different way than what she thinks.

For now, the plan needs Michael to learn ethics – because how does he hope to sneak into the Good Place if he doesn’t know the first thing about being good?

This task turns into Chidi’s personal hell more times than not, though the professor manages to find some gratification in there as well.

As expected it takes a demon some time to learn ethics and meanwhile all kinds of weird can happen.

Tahani – the benefactress whose only reason to do good was outshining her sister – suddenly thinks she might have feelings for Jason, after he proves to be quite skilled in bed. This somehow makes Janet breakdown and it is later explained that the sophisticated robot, stole from the Good Place by Michael, remembers her pseudo-relationship with Jason despite being rebooted as many times as the experiment.

To put it simply, Janet is jealous and heartbroken, which causes her to malfunction and almost bring down the neighbour with earthquakes and other catastrophes.

Season 2 of The Good Place is hilarious and brilliant just like the first one. While the plot twists don’t surprise as much anymore – you already expect the weirdest from it – the show keeps its simple yet disarming humour and wit.

It’s refreshing to be able to laugh at silly jokes that are made at the expense of no one in particular. The Good Place doesn’t need to be hurtful or disrespectful to be funny and it’s a good change on our screens.

Watching many TV series, I’m always waiting for them to lose their appeal, but so far The Good Place keeps me laughing and giggling throughout every episode.

The Good Place resumes on January 4th with its last two episodes of the season and has already been renewed for a third one.

If you missed the first season of this forking brilliant comic show you can – and should – binge it on Netflix or purchase it on Amazon Video.