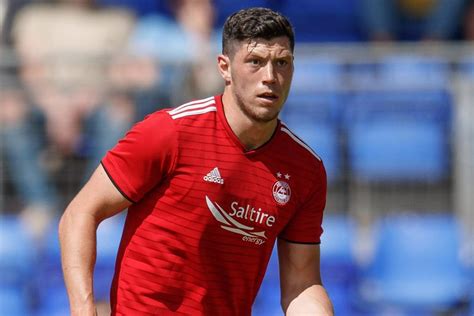 Ryan Christie returned to haunt his former side volleying home the rebound of his own shot in the fifth minute of first half injury time, which Joe Lewis could only send back into the midfielders direction.

He said “It was a tough one to take, we stuck to our game plan and it’s unfortunate that we lost Gary (Mackay Steven) to injury and then after a long break we concede a soft goal, the boys in the dressing room are gutted but i know the boys will come good and hopefully we can get a good run in the Scottish Cup now.”

Several flash points occurred in the second half of the match at Hampden on Sunday afternoon, with Shinnie, Lewis Ferguson and Sam Cosgrove coming to blows with Celtic midfielder Scott Brown and defender Mikael Lustig. Which can somewhat tarnish what was a huge day in Celtic’s history, a record seventh consecutive trophy. Something which no club has previously done.

“There will always be a few cocky ones who get a bit confident knowing they’re comfortable waiting for the final whistle,

“I think they lacked a wee bit of class if I’m being honest but we will get over that. We need to concentrate on our own game, we’ve got the big match at Ibrox on Wednesday night so maybe we can use that going into Wednesday.”

This draws a shadow of doubt over Brendan Rodgers side, are they poor winners or are Aberdeen just sore losers?

Scott Brown has a long history with Aberdeen, most recently at Pittodrie, proceeding to goad fans after receiving a heavy tackle from Sam Cosgrove and many see him as a cult hero.

However some see this as a step too far. Myself included. Intentionally kicking and goading a young player in Lewis Ferguson who admittedly should’ve saw red for his reactions and ultimately disrupted Aberdeen’s rhythm which could have found them an equaliser to take it to extra time.

Previous post Is Racism Still Alive in the 21st Century?