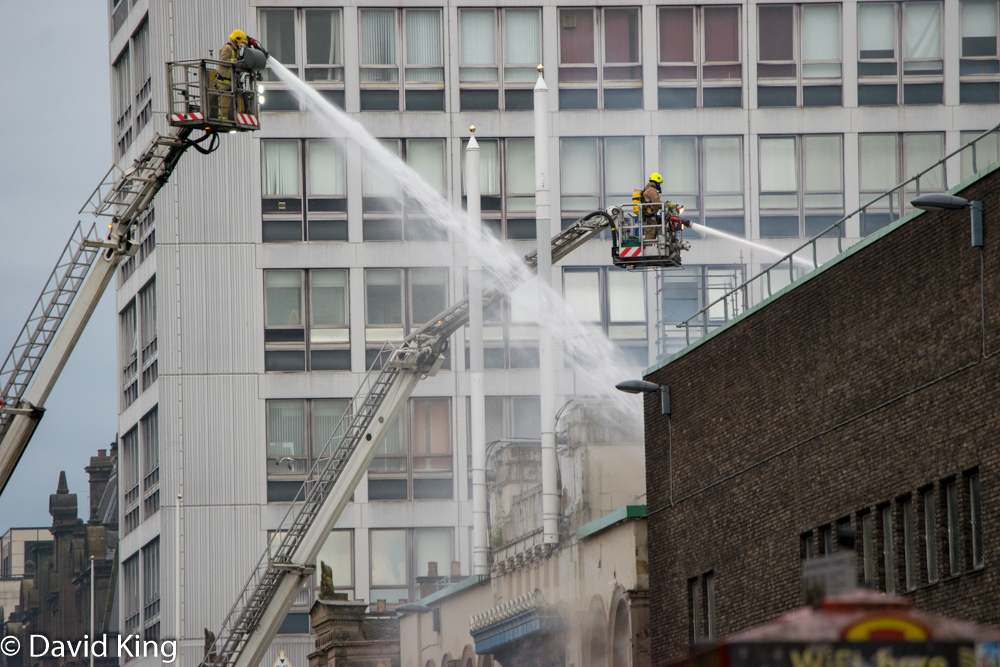 The Mackintosh building has been destroyed by a fire that quickly spread last night and severely damaged the roof of the neighbouring ABC venue.

A huge fire broke out in the Mackintosh building close to 11.20pm yesterday and grew quickly into a blaze that could be seen from around Glasgow.

Today the flames had been contained, but firefighters were still on site battling small fires throughout the building.

“There are a few hot spots, a few areas where we can still see flames and we still have some smoke coming up.

“It’s difficult to reach because it’s a very large building and we’re only firefighting from the outside, because of the risk of collapse of the structural elements.”

The scene in the morning showed that the flames had spread to the O2 ABC music venue and Campus nightclub.

Photos from Police Scotland show the O2 ABC suffered significant damage, with the roof looking like it collapsed entirely.

The Mackintosh building, where the fire started, was much more severely affected by the fire, which the emergency services managed to contain in the nearby area.

Over 120 firefighters and 20 fire appliances have been employed last night to contain the incident.

High-volume pumps have been used to bring water from the Clyde river to tackle the blaze.

A representative for Scottish Fire and Rescue Service said it’s too early to determine where the fire originated inside the building or what might have caused it. He said:

“The building in which the fire started has been extensively damaged in the fire. It has ripped from the ground floor right through to the roof. It is significantly damaged, we were focusing our attention to preventing it from spreading.”

The Deputy Chief Officer said 27 residents were moved to the Mitchell Library as a precaution, but they should be able to return to their residency, which were not damaged, by the end of the day.

He said this morning:

“We did evacuate some people on the opposite side of the street around the building, so that included the businesses that are along Sauchiehall Street and then some of the residents here on Dalhousie Street.

“We expect they will be able to return to their residencies in a matter of hours once we’ve done a bit of clean up. None of those properties were damaged across the street, it was a precautionary evacuation.”

The fire has spread to nearby premises, but the emergency services managed to get it under control and confine it to the block.

So far there are no reports of casualties. Both Renfrew and Sauchiehall Street were quickly evacuated last night, a Police Scotland representative said.

“I would have to praise members of the public who did respond very quickly to both the fire services commands to evacuate and for ourselves and also the licensed premises who evacuated very very quickly once it became clear it was a major fire,” she said.

The Mackintosh building had been under renovation after a fire incident in 2014. The library was under reconstruction and the flames that tore through the building last night have likely destroyed all the work done.

The university has issued a statement, saying:

“The Mackintosh Building has been undergoing a period of extensive restoration following the fire in 2014 and therefore has not been a part of the GSA’s operational campus for four years.”

While students were worried the fire would destroy all the coursework, the BBC reported that the exhibition by graduating students took place at the nearby McLellan Galleries and the art school’s Reid Building on the other side of the street. According to the Deputy Chief Officer the fire was contained to the block, and buildings on the opposite side were not damaged.

The site remains under control of the Scottish Fire and Rescue Service.