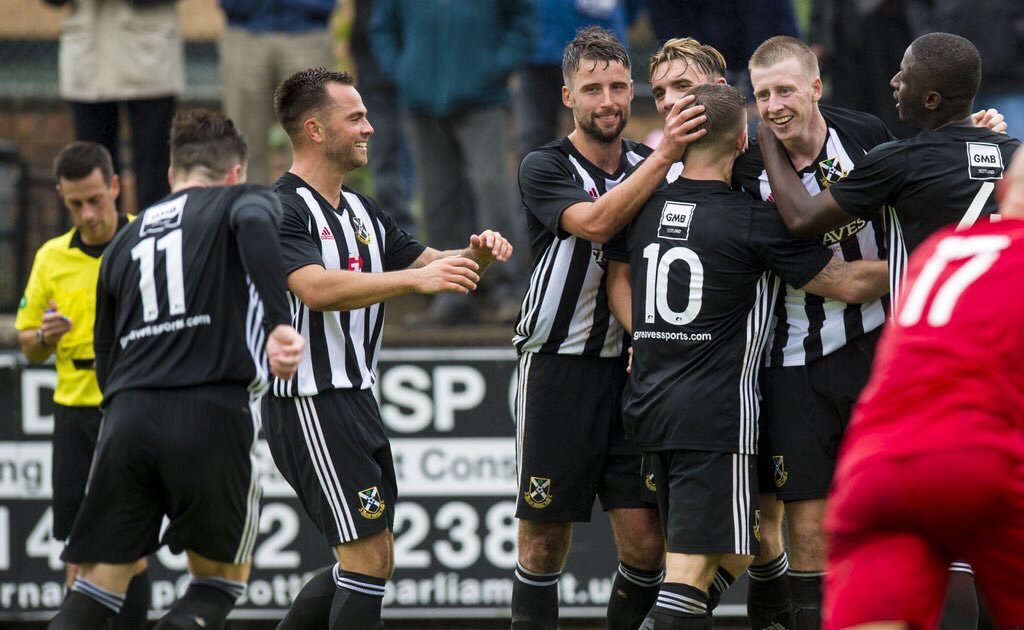 Murdo McKinnon got the first win of his Pollok FC tenure on Saturday afternoon with a fine 3-1 victory over 10 man Cumnock at Townhead Park in a Scottish Cup 3rd round replay.

Pollok started the game the brighter of the two sides having the first chance of the game five minutes in through David Gormley.

Grant Evans played a neat forward pass into the feat of debutant Josh Watt, who slid the ball into the path of Bryan Young on the right hand side of the area, who knocked it into Gormley’s direction. Who fired the ball across the goal and out for a goal kick.

Cumnock nearly made Pollok pay for their missed chances five minutes later. Jordan Longmuir left Carmichael’s deep cross from the left hand side, which allowed Reid to run in at the back stick, who dinked the ball back across goal only for Anson to head high and wide of the empty goal.

Pollok took the lead in emphatic fashion 20 minutes in. Bryan Young’s corner from the left hand side was met by the David Gormley. Who beat his man in the air six yards out and head beyond the reach of Ally Semple into the net.

60 seconds later Danny Mackenzie’s ball over the top was met by the Josh Watt who instinctively lobbed the ball over Ally Semple after he caught him off his line to give the away side a two goal cushion.

Cumnock found themselves only a goal behind nine minutes later. Pollok switched off from the throw in on the right hand side, in which Reid’s ball from halfway found Scott Anson 18 yards out. Both Pollok defenders allowed him to turn and lift the ball over Longmuir into the top left hand corner.

Two minutes later Anson turned hero to sinner, after he was judged to have handled the ball in the penalty area following Danny Boyle’s header. David Gormley stepped up but Ally Semple pulled off a fantastic save to his right hand side parrying the ball behind for a corner.

With 10 minutes of the first half remaining Cumnock found themselves reduced to 10 men.

Shaun Fraser timed his tackle perfectly on Faulds to set Pollok on the counter attack and In a moment of madness Faulds proceeded to kick out in Fraser’s face/chest, leaving the ref no option but to give him his marching orders.

Ross Brash completed the scoring with just under half an hour remaining. Grant Evans picked the ball up in his own half. Giving some fans a flashback of Maradona in ’86 he fantastically dribbled through four Cumnock defenders. He played a neat through ball to Brash into the right hand side of the penalty area, who proceeded to fire the ball across goal into the bottom left corner from 15 yards out to send Pollok through to the 4th round of the Scottish Cup.