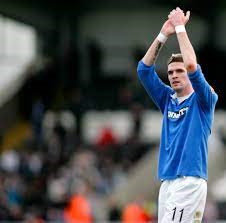 Following Kilmarnock’s playoff defeat at the hands of Dundee yesterday, which sealed their relegation to the Championship, fans were understandably upset, and a group congregated outside the player’s exit way to let them know their frustrations.

A Twitter video from user @murraybaird7 shows Kyle Lafferty – arguably the only Killie player to finish this season with the love of the fans – trying to calm fans down, expressing his disappointment with how the season has gone and insisting that the other players feel the same way.

The fans are clearly ready to listen to Lafferty and believe that he is hurting – one even shouts “I love you”, with some added profanity – but Killie fans are sceptical of how much the other player’s care.

The sentiment of the crowd is echoed by Kilmarnock fans in the replies to the tweet, with one saying Billy Bowie and Gary Dicker should be “ashamed”, and multiple supporters sharing the view that they sent Lafferty out because they knew that he would not get much, if any, abuse from the fans.

The replies are also filled with love for Lafferty, and as is inevitable when a football team gets relegated, some rival fans have showed up to rub some salt into the wounds.

Killie will of course be hoping to bounce straight back up, but it will be no easy feat, especially given how tight next season’s Championship table looks like it may be.

Tommy Wright looks like he will be the man to lead the charge, and the club has already said that they plan to keep their playing staff budget the same despite dropping down a division.

Previous post 10 SPFL CLUBS WITHOUT A MANAGER; WHO’S GOING WHERE?

Next post COVID 19: How Higher Education in Scotland was affected by the Pandemic