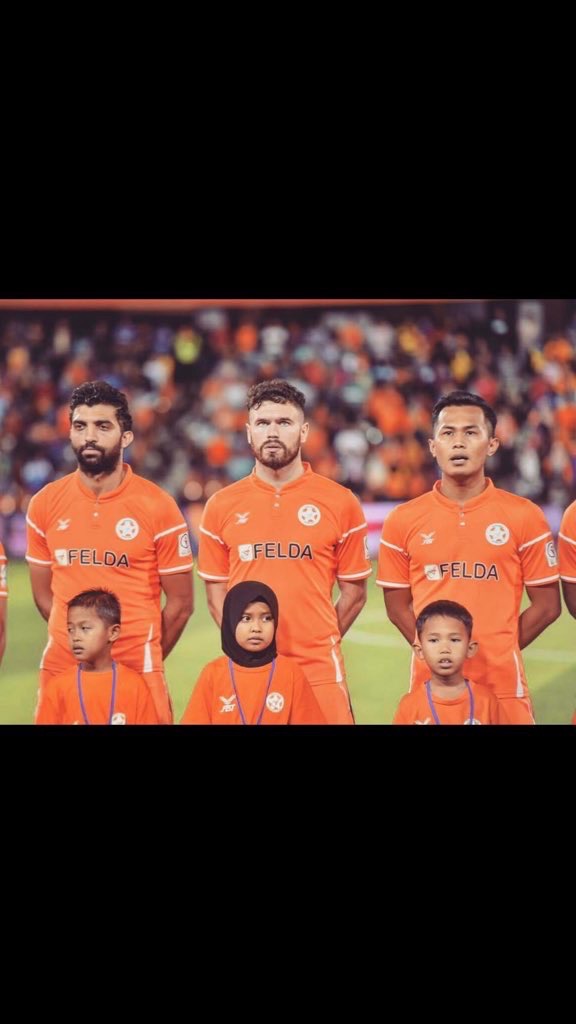 ‘Always chasing the Dream.’ An inspirational quote for any aspiring footballer. With Stuart Wark being no different, a modest guy from East Renfrewshire who has went from paying to play for junior outfits such as Muirkirk and Lugar Boswell Thistle in South Ayrshire to now embracing the bright lights of Kuala Lumpar with Felda United, where he is now a household name for many a fan of Malaysian football, even in contention for a call up to the Malaysian national team squad after gaining Malaysian citizenship.

Wark admitted it’s a strange story and seemed quite embarrassed when first asked about his journey to where he is today, even surprised that I knew his story. “It’s a bit mad to be honest, it’s really weird how I’ve went from rags to riches but not in your conventional way, I’ve always liked travelling, the Scottish weather just never appealed to be, I hated it so I was always going away at the first opportunity to catch a bit of sun and I just really loved playing football and it always tied in with where I was travelling to and with visas. I’ve went from playing in front of less than 70 people and they’re dogs, probably more animals than people to be honest to playing for Felda United this year in front of 20,000 people,

It’s so surreal. I’m so lucky to be where I am for people giving me a chance and taking me on trial.”

At 18 Wark was released from Alloa Athletic pro youth, after being told he wasn’t tall enough, maybe something that has caused the demise of Scottish football, he then went to join local side Saltcoats Victoria where he was picked up by Carlo Walker for a season, which was followed by a spell in America, playing PDL with St Louis Lions, his first experience of full time football. He then returned to Scotland and teamed up with Keith Jackson at Muirkirk. Sandwiched between another spell overseas with Altona City and Albany Creek Excelsior in Melbourne and Brisbane respectively with a gap at junior minnows Lugar Boswell Thistle.

Once I’d played my third season with Lugar where I’d played under Carlo Walker again and then Geordie Grierson, I got the travelling bug again and the aim for me was to always make it as a professional footballer and I went to back to Australia to try and crack the A League, having previously played with Altona City I knew that the standard was really good, you had guys coming over who had played in League One in England with the likes of Crawley Town and even the championship playing and it really was really enjoyable. I was really fortunate to join Albany Creek, I’d emailed two clubs asking for a trial or even if I could train to get fit when I went out there. I was 26 at the time and I was at the time asking myself if I really wanted to continue pursuing a career in football, Brisbane was last chance saloon for me.

It was my final shot of making it, I had always been so close to making it pro and always just missed out.

When it came to me training with Albany Creek, I wasn’t as sharp as I could be and was off the pace a bit so they were patient with me. I had to travel out of Brisbane to where they train in the suburbs.

The session got called off due to rain after half an hour and I thought that was my chance gone but they invited me back out and I’d ended up using the little money I had to get back out for training on the Thursday and luckily they liked me and signed me.

I’d started off in the reserves and the way it was organised in Australia was that the reserves would play at midday and then the first team would play at 7pm later that night and I remember after my first reserve match I’d played 70 minutes and got took off, I was pretty annoyed as I thought I was playing well and as I was going off I got told to shower go and relax, get a massage or whatever as I was in with the first team later that night and I’d came on as a sub for the final half hour in that game and it all kicked on from there.

Once his Visa ran out, Stuart had options to look over and decisions to make. He could either try going to New Zealand, where he could play at a similar standard or try and gain sponsorship for another Visa for working and playing in Australia. Then something truly amazing happened. His cousin, from his Mother’s Malaysian background came over and enticed Stuart to try Asian Football, full time football, the dream he had always been chasing was becoming a reality.

“My cousin had come over at the end of the season to watch me play and he’d asked about my situation and explained that he knew a few agents and owners and asked me to go with him. He managed to sort me out a Malaysian passport and citizenship which was available due to my Mum being Malaysian and he managed to get me into JDT Johor (Darul Ta’zim) in the premier league. The standard was surprising and a lot of people are surprised of the standard of football, a lot of foreign players will come over and struggle here. It can be very technical and fast paced which sometimes European football is very different too. It definitely not a walk in the park, at first it was quite hard to adjust the culture is very different, family and food is extremely big, so the likes of squad nights out don’t really happen over here like they do back home and it took a while to acclimatise which probably effected my football there so I moved too Sabah who are a state team in the super league, state teams generally have a lot more money behind them and get a lot more fans sometimes getting up to 100,000 at games over here. Most teams are either franchises or state teams here, which is why they get so much

“The turnover of players here if really high and you very rarely get more than a year’s contract unless you’re really young and the owner thinks you could make it big and they could get a lot of money for you. So I only stayed with Sabah for a year then joined Felda United where I’ve had my best spell in Malaysia over the last two seasons. I’ve had so many good memories here and probably

My proudest achievement, playing in the Asian Federation Cup (Europa League). I was living the dream, travelling to different countries to play teams from Thailand, Singapore and Vietnam, the standard was immense.

I really enjoyed testing myself at that level. I’d played really well that year and there was a lot of media speculation that I was going to be called up to the Malaysia squad, I had my agents saying that they thought the call was coming, sadly it was just speculation, but it was good for my confidence that people thought I was playing that well. Playing in front of 20,000 in the Quarter Final of the FA cup this year too was so surreal, the best atmosphere I’ve experienced, we went through some problems last year which meant the league relegated us from the Super League, but we bounced back and we won the Premier League this year which again was a fantastic achievement.”

“Looking back it’s all a bit mad how everything’s happened. Like my friend who I met in St. Louis, he ended up playing in Costa Rica and it was him who got me into believing about ‘Always Chasing the Dream.’ It’s why I live by it, you need to stay humble because it could all end tomorrow, I tore my Lateral Collateral Ligament and I missed a lot of this season so it all put it into perspective for me. I need to stay humble because I could go back to be playing for Lugar or Muirkirk against the likes of Irvine Vics in four inches of snow in December instead of out here living the dream.

“It’s a great story to tell the grandkids anyway!”

With his options open again as Malaysian football enters it’s off season, could Stuart’s unconventional story take another twist we ask? Thailand? An American expansion team? Who knows! The dream is well and truly alive and kickin’!