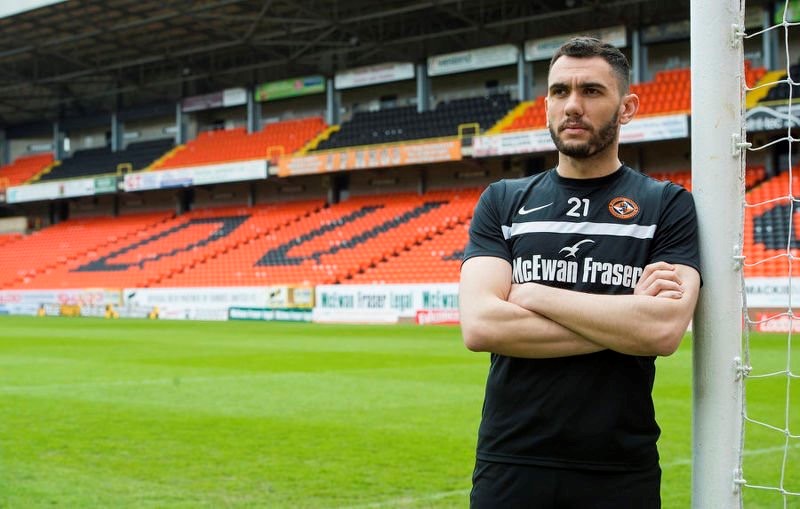 Dundee United are a side on the up. Only six players remained from a turbulent season which saw them remain in the Scottish Championship for the third season running, now they have a full squad and a new coach in Robbie Neilson. One of the players retained is Turkish goalkeeper Deniz Mehmet.

A firm favourite on of the Tannadice terraces. After a horrific end to the 2017/18 season where he ruptured his Anterior Cruciate Ligament celebrating a goal against Dunfermline in the Play Offs at the beginning of May, he is determined to earn a new contract and prove to Robbie Neilson he is the man to turn the clubs season around.

Five months on from his injury, Deniz is making great progress; “It was a real freak accident as to how it got injured, considering I’d fell awkwardly catching balls from crosses or colliding with my defenders in front of me, but no, I get injured celebrating a goal its typical! Thankfully I’m two months ahead of schedule in terms of recovery, hopefully I should be back in full training by December. My knee feels great, I’ve started jumping already, something I wasn’t supposed to be able to do for another 2 weeks or so and I’m starting running on Monday (29th October).

“After getting injured I remembered something my goalkeeper coach at West Ham Jerome John said to me he said to me when I was going away to a tournament with Turkey don’t go looking for things that don’t involve you and I remember watching a game at home and a keeper came flying out and got really badly injured, that’s when the penny dropped and it all clicked. You don’t need to get involved. I stand by that as much as I can.

“The Club have been great with me, in England there’s a rule where if your contract is running out and you get injured, the club has to give you something, whilst in Scotland the clubs don’t have to do that. The club gave me a six month extension until January to help see me through my rehab and hopefully I can extend it by at least a year when it comes round to showing my worth to the new gaffer, I had actually kept a clean sheet against him for Port Vale when it was one of his last games at MK Dons, so hopefully he remembers that. The people around the club have been brilliant too. They’re always asking after me and wanting to know when I’m back, the fans have been fantastic too. I get hundreds of messages asking when I’m back or that they can’t wait to see me playing again, it’s nice to be recognised and not feeling like I’ve been forgotten.

“Everyone is really supportive, it’s like a big family.”

After playing in youth academies in London for the majority of his life, Deniz left West Ham to join Kayserispor after being ear marked with his performances for the Turkish youth teams. After four years of being understudy to current Turkey No.1 Sinan Bolat and Hakan Arikan who was also had a successful spell for Besiktas. Mehmet knew he needed first team minutes. Yearlong spells at Falkirk and Port Vale followed where he kept two clean sheets in a row for the first time in Port Vale’s season. Then the call came from Ray Mackinnon, to come up to Dundee and play at Tannadice, somewhere that is totally different to the likes of Kayseri, London, even Stoke!

However Deniz adapted to a changing city which he is now happy to call home, as he looks out of the executive box of a sponsor on to the pitch at Tannadice; “It’s good to be back in Britain, closer to my family, when I was first out in Turkey it was really hard, I was miles away from my family, I couldn’t see them as often as I wanted. It was demanding, which helps in times like this whilst I’m injured.

“Dundee as a city is home for me now.”

“I’m really enjoying my time here, it’s a nice place to play and to train, even too look at.

“The club have been great with me, they sorted out the operation on my knee and covered the costs for me too. There was so much going on which left me with a million and one things inside my head to process at the time of the injury, in terms of the play offs, my contract being up, where I was going to have my operation, how much it was going to cost. But the club sat me down and said look we’re going to stick by you, we will help with your recovery you’ve been a great lad you’ve caused us no hassle either.

“They didn’t have to do that either, so it just showed what a classy club Dundee United are. Dundee is somewhere that I’ve definitely got used too. I know my way about and where there’s nice restaurants and shops. If I’m on the phone to my mum I’ll say that I’m just going home from training as if its second nature. I definitely feel at home here and I would like it to be home for a while. I’m settled here.

“I like the city, I think it’s really nice, maybe the people here might not say that, but when you’re not from here you begin to appreciate it more. I lived and grew up in North London and I was only 7 miles from Central London and I never went there until I was at least 17, simply because it was there and it was always there. The people here are nice, and it shines through in the club. The way that they’ve been with me since my injury, even with Fraser Fyvie too, who was in a similar situation. Same injury, contract running out and Csaba Lazlo gave him a new contract and the club sorted out the rest. There’s lots of things to do, there’s the new V and A museum which is really popular, and it’s in my plans to go there at some point.”

“At first being here was really tough, possibly being one of my lowest points. Purely because I wasn’t getting minutes. I’d done well in pre-season and the Betfred Cup games, but I couldn’t get into the starting eleven for league game no matter what I was doing. But then everything changed and boom, that’s when it all settled into place and I was in the team. I’m loving my football and enjoying life in Dundee. You’ve got to enjoy your football while it lasts and that’s something that I stand by.”

Next post Beith march on to end Renfrew’s run