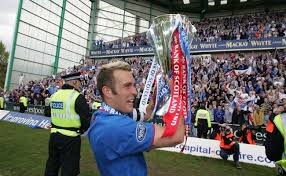 Former Rangers Captain, Fernando Ricksen has died at the age of 43 after a six-year battle with Motor Neurone Disease.

The former Dutch international star had been battling with the life-threating condition since 2013.

Ricksen was loved by so many Rangers fans during his six-year spell at the club after being signed from AZ Alkmaar by Dick Advocaat in the summer of 2000.

He helped the club win the domestic double in 2002, the treble in 2003 and captained the team to a double in 2005, winning the League and the Scottish Cup.

Rangers FC Spokesperson on Twitter said: “We are deeply saddened to announce that former player Fernando Ricksen passed away this morning following his battle with Motor Neurone Disease”

The club later added: “The thoughts of everyone at Rangers is today with is Wife Veronika, his Daugther Isabella and all his family and friends.

After his diagnosis in 2013, Ricksen spent years battling MND campaigning to raise money to find a cure for the debilitating condition. His charity has raised over £1m to help scientists with life changing reserach to find out about MND which affects the nerves and muscles causing weakness over time.

Ricksen left Ibrox for Russian side Zenit St Petersburgh and was there reunited with his former Rangers boss, Dick Advocaat. Fernando was part of the Zenit squad that reached the 2008 UEFA Cup final against Rangers, though he did not feature when the Russian side on 2-0.

Between the years of 2000-2003, Fernando won 12 caps for his country The Netherlands, where he played alongside Giovanni Van Bronckhorst, Ronald de Boer, and Wesley Sneijder.

Rangers manager, Steven Gerrard, paid his respects before his press conference today in the build-up to the Feyenoord game on Thursday night.

Gerrard said: “Very sad news everyone, more-importantly his young family. On behalf of the club, I would like to pay tribute to Fernando. A fantastic player who played with his heart on his sleeve.”

Rangers boss, Steven Gerrard later added: “I was lucky enough to meet him a couple of times. You could see the fight he put up. The tributes will pour in not just for the player but for the man.”

Previous post Only with The Heart: a study of war’s impact on humanity after a career in capturing it
Next post Fernando Ricksen memorial at Ibrox