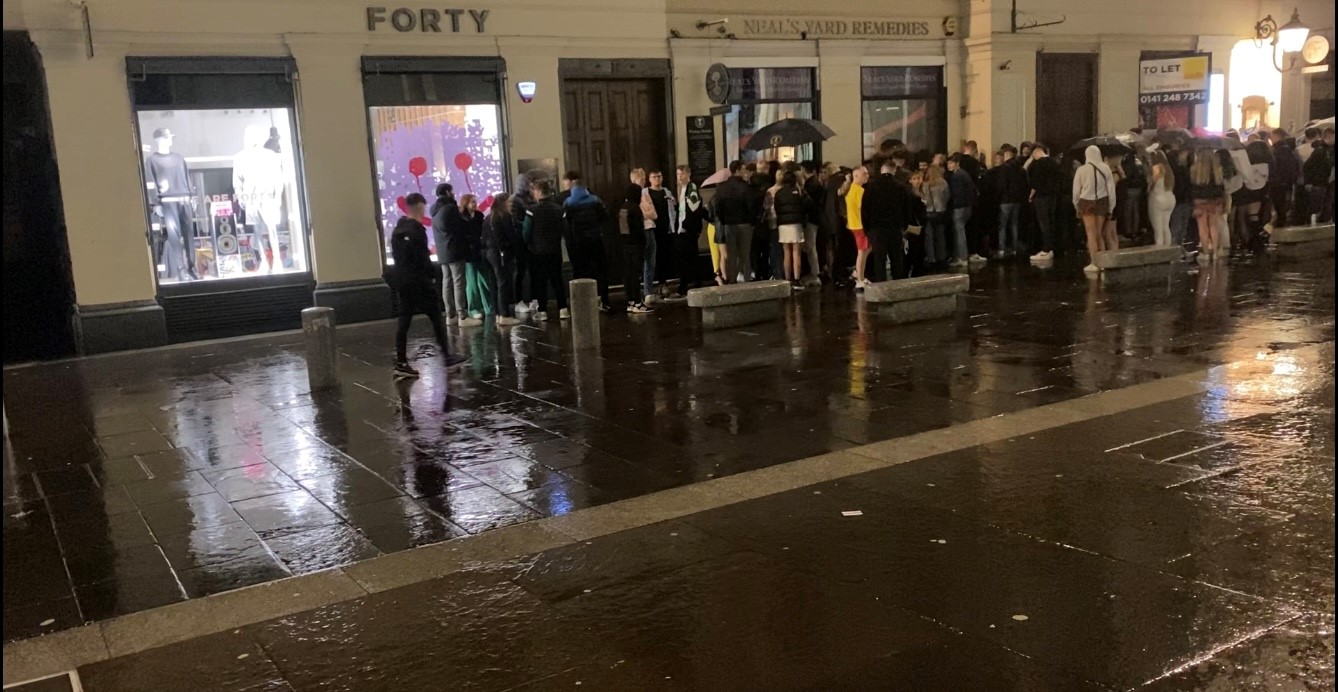 In 2021, more people were spiked in Scotland than any other year. With restrictions on the night-time industries lessening this week, what effects will that have on the number of spiking incidents in Scotland in 2022?

Two women who were spiked in 2021 but didn’t report it to police were best friends, Molly Durkin, and Lucy Williamson.

The friends had attended a gig at Glasgow’s SWG3 venue when they were targeted.

Molly said: “It was at the peak of it, so I was thinking about it, but I never thought it would directly happen to me.

“We were there with two other people, but Lucy and I did a shot that none of them did.

“That is the only key difference on the night. I think that is where it all went wrong.

“I was looking like I was going to fall over…the next thing I knew I was on the toilet…but I couldn’t move my body at all.”

Lucy and Molly were separated in the venue with both girls being looked after by one other friend.

Lucy said: “I think I passed out on the floor next to the cloakroom…I didn’t know what was happening.

“One of the security guards came over and said, “right girls you are going to need to leave, it’s time to go”.

“She saw what state I was in, and she had to carry me to the first aid room.

“Looking back on it I do kind of make jokes about it but when you really think about it, it is kind of terrifying.”

The video below details some of the effects of spiking and what some people are doing to combat it.

The reason for petitions like these is to make people more comfortable with reporting these instances but spiking victims, Molly Durkin and Lucy Williamson felt that the SWG3 were dismissive of their friends’ claims that they had been spiked.

Lucy said: “They (the first-aid staff) were asking “are they on their period”, “are they tired” or “have they had this or that”.

Molly said: “Monica and Hannah (their friends) said that they think we had been spiked but the staff were like “no there is no way, you have not been spiked”.

“They probably didn’t want for us to go about saying it or to phone the police and get them a bad name.”

The pair criticised the SWG3 staff who tried to separate them in the first-aid room from one of their friends outside it.

The SWG3 responded in a statement saying: “We as a venue take every report of spiking and harassment seriously. Once a report is made the customer is taken to First Aid and where possible with at least 1 friend. Once in First Aid, the customer is assessed, and a description of the incident is given and recorded which is then passed onto security.

“All customers are given the option to contact the police which we would facilitate and support. Should the customer require further welfare assistance this is always available. We will continue to be vigilant in our commitment to the welfare and safety of our customers.”

The SWG3 aren’t the only licensed night-time establishment to implement safety measures to ensure women’s safety.

Sandy MacMillan, the owner of the bar “Inn Deep”, spoke about the policy there to ensure women’s safety.

He said: “We are working with Unite Hospitality on an updated sexual harassment policy so that if staff or customers feel that they are being harassed or bullied then there are policies that are going to be there that we are finalising.

“One thing we do know is the ask for Angela. That’s where if someone is in and feeling uncomfortable then they can come up to the bar and we can get them away from the situation.

“Safety is something that we are actively trying to ensure.

“I think with restrictions it was a bad time for the industry in terms of loss of earnings but in terms of safety, we could guarantee who was at each table and that put more emphasis on safety.

“I can only look at things from a man’s point of view and when it is specifically women who are being targeted you need to listen to your female members of staff as it is something they would have more fear of experiencing.”

The number of women being targeted resulted in the start of the Girls Night In campaign in which females boycotted nightclubs on a set day to demand increased safety measures be introduced.

Ex-police officer, Jim Gamble, believes that the increased awareness of spiking through things like Girls Night In has resulted in more people reporting it.

He said: “Like a lot of things they say there is a massive increase. I don’t necessarily think that is true, I think what is true is that people are more willing to report it.

“They are more prepared to come forward because nowadays you are treated more respectfully than what you were years ago.”

The 152 cases of spiking in Scotland consisted of 69 people having had their drink spiked, 51 being injected and the remaining 32 police couldn’t establish how they had been drugged.

Both, Lucy Williamson, and Molly Durkin got people they trusted to check them for pin marks in case they had been spiked via injection.

He said: “If they are using syringes, it is a bit of a worry because there are so many blood born diseases that can be transmitted.

“It is easier to spike nowadays but the side effects are more dangerous.”

Previous post From New York to New Zealand, the rise of the solo traveller across the globe

Next post Magnet fishers recover underwater treasures from Scotland’s past