Skip to content
Football Glasgow In The Spotlight Sport 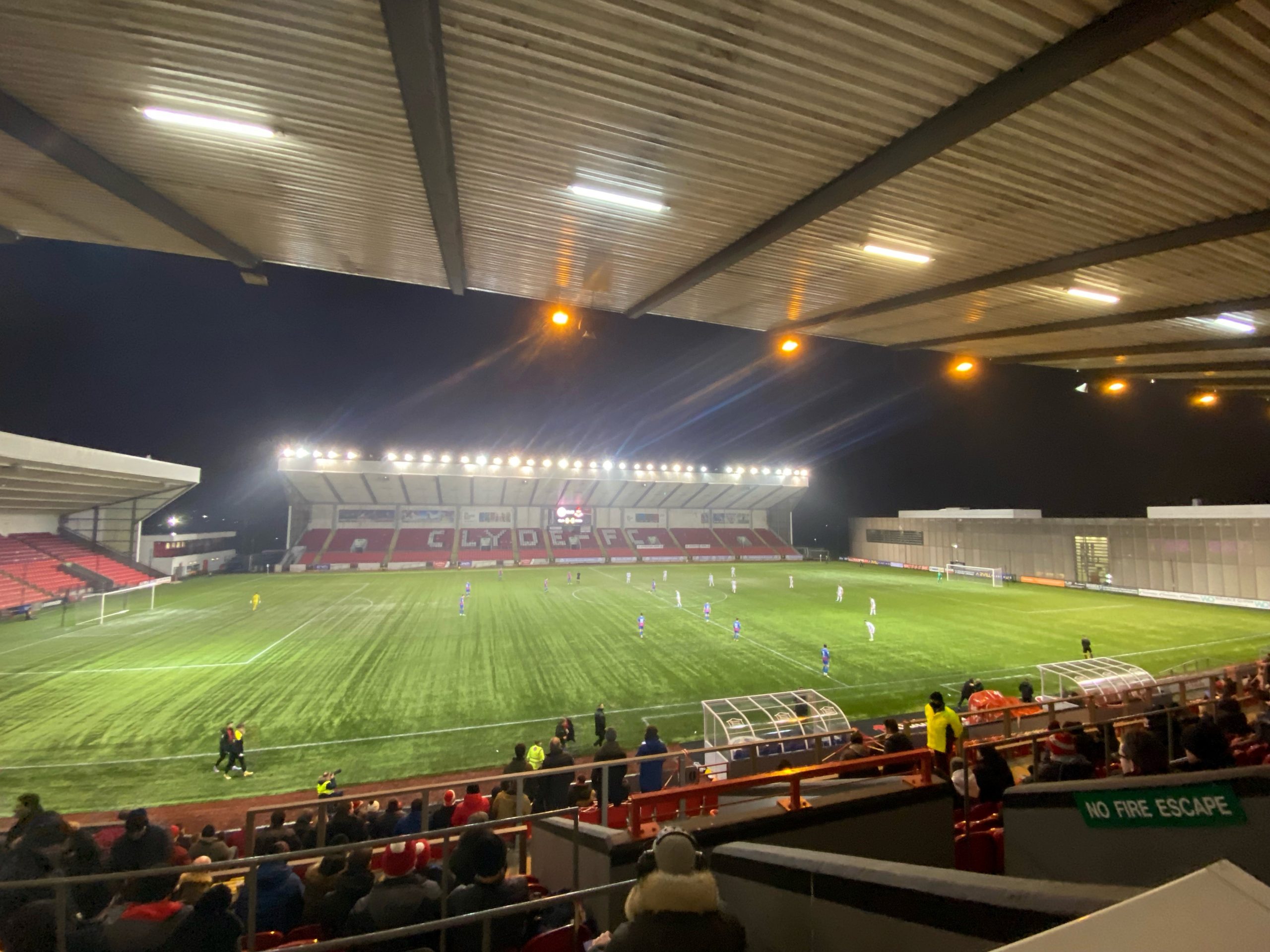 A frantic final 20 minutes at Broadwood Stadium last night witnessed four goals between Clyde and Airdrieonians in the Cinch Scottish League One.

Not once, but twice did Clyde come back in the 2-2 draw…and the Bully Wee could have won it in the final seconds.

“We could have maybe nicked that at the end, and it probably would’ve been daylight robbery… sometimes you need to come away from it and think that is a really good point and Saturday and today are two examples of that.” said Clyde goalkeeper, Neil Parry.

“I had an incline, but I wasn’t expecting to go back in just because I haven’t played in so long,” said Jamieson.

Two other changes for Clyde included the league’s top scorer, David Goodwillie, starting alongside Kevin Nicoll who made his 100th appearance for the club, replacing Gregory Tade and Morgaro Gomis.

But it was Tade who would come on and bail his side out later in the game.

There were three changes for the visitors as fans’ favourite, Kyle Macdonald, returned on-loan from Dunfermline to start.

Celtic Loanee, Brody Paterson, made the bench after signing the same day with top scorer, Callum Gallagher and Josh Kerr who had just returned from injury, starting in place of Agnew and Walker.

A goal-less first 45 was dominated by the Diamonds who enjoyed the majority of possession with Clyde’s only real output being long balls to their strikers.

The best chances fell to Airdrieonians with Rhys McCabe and Josh Kerr testing the keeper.

The Bully Wee had to rely on individual creativity to carve out chances with David Goodwillie even trying an audacious bicycle kick from the edge of the box, firing the ball high into the stands.

The second half’s first big chance fell to the away side’s number 10, Dylan Easton, whose 25-yard shot smacked Neil Parry’s crossbar which left him rooted to the spot.

Frizzell was yellow carded for Clyde in the 52nd minute before new man, Lewis Jamieson, was replaced by Rob Jones in the 58th minute.

Neil Parry came to Clyde’s rescue once again when he saved Callum Smith’s effort in a one-on-one situation on the 62nd minute.

“It was good to play my part. Everyone dug in and maybe it wasn’t the prettiest at times, but we defended, put blocks in and we were able to get the point,” said Neil Parry.

An injury picked up by in-form man, David Goodwillie, who scored in Clyde’s previous game, saw him being replaced by Gregory Tade in the 66th minute.

“He looks fine. The last month he has had a few problems that he’s been nursing, and it was great to have him back tonight,” said Danny Lennon, post-match.

Airdrie’s first change of the evening was in the 70th minute which saw Scott McGill making way for Jordan Allan – a change that would prove pivotal in the clash.

With around 20 minutes to go, Airdrie finally broke the deadlock when Dylan Easton, whose one-two with Kyle MacDonald split the defence as the number 10, slotted it into the bottom right of the goal.

Kevin Nicoll was booked trying to stop Airdrie’s counter-attack, but the visitors continued with the ball rolling to star man, Gallagher, but he blasted his chance high over the bar on the 82nd.

Nicoll’s yellow would have little effect on the game as he made way for Mortimer seconds after.

It only took 14 minutes for substitute Jordan Allan to make an impact after he volleyed home a deflected shot to put the League One’s second-placed side into the lead.

But, with two minutes of the 90 remaining, Clyde’s sub, Billy Mortimer rebounded Adam Livingston’s 30-yard dipping shot after keeper, Currie, had forced it on to the post.

Relief for the home section of the 743 supporters – but they could have left ecstatic if Tade had taken his chance in the box in injury time.

The substitute just couldn’t make the connection with the cross and a second goal involvement since coming on in the second half for the striker wasn’t to be.

Next post The last Pasiegos: The unique community living in the Cantabrian mountains of northern Spain