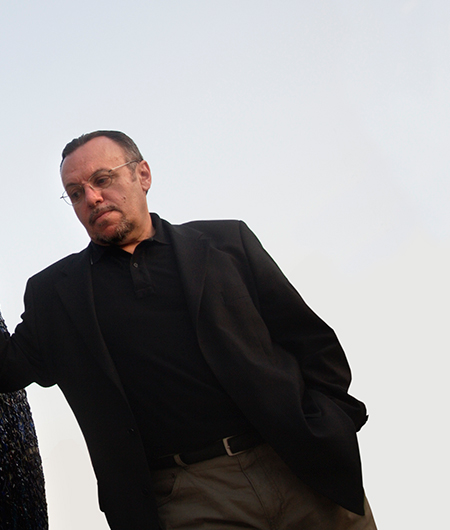 “Every author is kind of the son of all the books he has read, the films he has seen, the stories he has listened to,” Baldini, the latest winner of the “Alessandro Manzoni” award, believes.

Eraldo Baldini, author of over 20 narrative books, is better known around the globe for being the author of “Mal’aria”, a story about a fascist Italy battling malaria. His style has been defined ‘rural gothic’ and some reviewers have described his writing as vaguely anglo-saxon. His passion for the old legends of his land has been the highlight of his written production for many years now.

“I studied cultural anthropology and ethnography and the passion for cultures, especially of my own lands, is always very alive in me, so much so that I have always alternated my activity as a novelist and that of essayist.”

Baldini won the “Alessandro Manzoni” prize – one of the most important literary awards in Italy – last October. He tells the Clyde Insider:
“Obviously such award is a pleasure, and at the same time it adds more responsibility, because it pushes me to be ‘up to the task’.

“But that’s more in theory, in practice it doesn’t change much. A writer should always make an effort to be ‘up to the task’, he owns it to himself and his readers.”

He won the award with “Stirpe Selvaggia”, a story that stretches from the early 1900s to the end of World War II. The protagonist is a child living in the wooden highlands between Romagna and Tuscany, whose father is revealed to be the famous Buffalo Bill. The story follows the character as History keeps involving him and dragging him into critical events despite his attempts to escape his ‘destiny’.

Baldini was born in 1952 in Russi, a small town in Italy not too far from the touristic destination of Rimini on the Adriatic coast.
He owes his passion for literature to his book loving mother.

“We were a family of humble conditions, we often had to renounce many things, but never books.”

His love for writing blossomed when he was a child and he found out at a young age that writing “came easy to me and it was really amusing and fulfilling.”

Now Baldini can get his ideas for stories from pretty much anything. He describes the search for a new topic as “a kind of mystery”.

“How do you come up with the idea for a narrative book? In the most disparate and sometimes unknown ways,” he says. “The ideas can come in many different ways: something you heard or saw, a memory, a thought.

“All of that, with a dressing of good imagination,” he adds.

When he’s doing research for a new book, he wants to experience the same environment his story plays out in:

“I try to immerse myself in the same space and time my characters will move into.

“I read about the topics I want to write about, I read newspapers from the time period I want to set the story in, I visit places that will be scenery in the book.”

We all have that one author we carry close to our hearts, the one who sticks with us through change and growth. For me that probably is Richard Bach, his books never cease to talk to me, his words always the same on the paper, always new in my mind.

For Baldini, that author is John Steinbeck, an American novelist who won a Pulitzer Prize with his book “The grapes of wrath”, portraying the plight of migrant workers during the Great Depression. Baldini tells us that Steinbeck above all inspires him as a writer.

“As we grow up we change, we find new things and new books… But I must say, my beloved Steinbeck is always at the top of the list, ever since I was a child.”

Readers have a favourite book, writers have a book they wish they had been the ones to write. But Baldini is not so sure this actually applies.
Books that he wishes he wrote himself? “There are many, I could say,” he starts to then backtrack a little, thoughtful:

“But maybe that’s not really true, because those books would lack that ‘something of mine’ which is fundamental in writing.”

His new book, released just a few months ago, received many positive reviews from the critic. “It’s a book that follows all the legends and appearances of ghosts in the region I live in: a geography of mystery that has always amazed me,” Baldini describes it.

Baldini leaves us with some advice for emerging writers:

“My first advice is to have patience and perseverance. Another advice is to be interested in everything,” he points out the importance of a solid cultural background.
“Then I would recommend to read a lot, because there isn’t a writer deserving of this title who isn’t at the same time a fervent and curious reader, eager for knowledge and stories.”

Previous post Weather: Scotland TranServ on how they handled the challenging weather