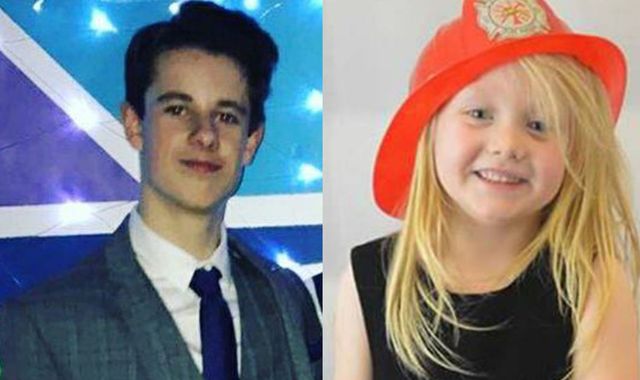 Aaron Campbell, has been sentenced to a minimum of 27 years, for the abuduction, rape and murder of 6 year-old Alesha MacPhail. Campbell,16, was told that he may never be released back into the community. The 16 year-old will be placed on the sex offenders register indefinitely.

Victim statements from the families said they were “devastated and heartbroken”.

The paternal grandparents of the 6-year-old Alesha MacPhail spoke in their victim statement of being “tortured and tormented” by the death of their grand-daughter.

They added she was a beautiful, smart, thoughtful, and kind girl. Her future was taken, so was theirs.

Judge Lord Matthews said “the effects on those who saw Alesha in the woods, will be long lasting. I have never before seen a police officer almost break down in the witness box, so affected was he by the sight”

Not once during the trail did I detect a flicker of emotion from you, that was also the experience of the professionals who interview you

Campbell’s defence QC, Brian McConnachie, said: “Clearly the most striking thing about both reports is the fact that in the reports Mr Campbell has admitted responsibility for the rape and murder.”

Campbell confession was in his Criminal Justice Social Report and the Clinical Psychologist Report, which were read out before his sentencing

Campbell told social workers after being found guilty he’d had thoughts of doing something extreme – including rape – for about 12 months before he attacked Alesha.

Campbell admitted many things in Clinical Psychology report. he admitted that “All I thought about was killing her when I first saw her” Members of Alesha’s family sobbed as the judge detailed the contents of the clinical psychologist’s report.

Aaron Campbell described it as “a moment of opportunity”

“Alesha was drowsy and when she asked him who he was he said he was a friend of her fathers and we was taking her home. He gave her his top because she was cold.

His lordship went into give some details of the report

He said; “You volunteered that you were quite satisfied with the murder”

Aaron Campbell, has today been sentenced to at least 27years in prison before he can be considered for parole, but may never be released.

There was cries of extreme sobbing as family, friends and people connected to Alesha left the courtroom as the details that were spared were read out.

Before Aaron Campbell was taken down there was shouting and swearing in the court, Campbell smirked to the public gallery.

Georgina, the Mother of 6 year old Alesha MacPhail shouted and swore at Campbell

Police has to refrain people from getting down to the front of the public gallery as emotion in the gallery reached its height as Campbell was taken down the stairs to start his sentence for the abduction, rape and Murder of Alesha MacPhail.

It’s believed to be the first time in UK Court History that a sentencing had been live steamed in a court in the UK, due to huge public and media interest.

The camera was requested by the BBC and was granted by the court for live streaming of the sentencing of sixteen-year old Aaron Campbell.

Next post SCOTTISH PARLIAMENT URGED TO BACK REVOKING ARTICLE 50.