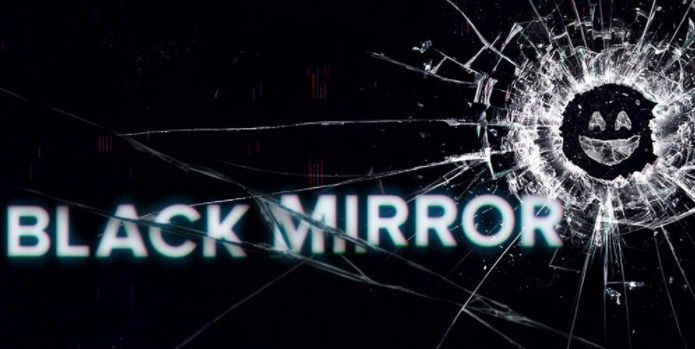 Season 4 of Black Mirror dropped at the end of last year and doesn’t fail the expectations.

If you’ve never seen the show, here’s a simple description: dystopian, brilliant, horrifying. The series focuses on the dark side of technology and of our society.
What makes the show scary is the realism of every episode. The things we see on Black Mirror may not be happening, but they could very much become real soon enough.
The series started off with two seasons of only three episodes each, but its incredible success brought it to be renewed for two longer seasons.

I binged season 4 as soon as I could after it was released on December 29th last year and, because I cannot sum up all the impressions I got from it, I’ve decided to do a ep-by-ep series of reviews.

Here I will leave you my personal ranking for the season.

1. “Hang the DJ” – Episode 4
At first, I couldn’t wrap my head around my feelings for this sweet, cute episode. Black Mirror doesn’t give a happy ending without hiding some sinister suggestion in between the lines.
When I found what the dark suggestion might be, I finally decided that the episode was not only brilliant, but my favourite of the season.

2. “USS Callister” – Episode 1
This episode was good for so many reasons, though at first I didn’t quite enjoy the end. Don’t get me wrong, I liked Daly’s end, it’s the final scene that, after a first viewing, disappointed me for no reason but my own personal tastes.
I might sound overly dark but I would have preferred if they had been blasted away by the first player they meet in the cloud. The seemingly happy ending didn’t quite set well with me, until I got to the darker interpretation – which then made me love the episode.
Other than that, USS Callister hits close to home – as Black Mirror likes to do. There is no bad guy and any of us could be Daly, because after all he is not hurting anyone in real life. He’s taking out his anger and sadness on digital copies, whose feelings he could have been completely unaware of. Does that make him a bad person?
Does virtual reality make us bad people?

3. “Arkangel” – Episode 2
How could I not appreciate the episode directed by Jodi Foster?
I didn’t look up anything about this season before watching it, I wanted to be truly and utterly unaware of what awaited me. When I watched the episode, I had no idea who the director was, but when I looked it up it made so much sense.
The story is carried out brilliantly, it’s hard and emotional at all the right times and the topic is typically Black Mirror-like.

4. “Black Museum” – Episode 6
Everyone seems focused on tearing apart Metalhead, but I find this last episode to be the weirdest one. It would not fit in as a stand alone episode if it weren’t for its position at the end of the season, which is, in my opinion, what makes it fantastic when it risked being disappointing.
While it tells its own story, Black Museum offers a sort of closure that justifies the oddity of the episode.
It was nice to recognise the various objects in the museum, and while I didn’t find the stories told particularly interesting – except for Pain addict – I enjoyed the final twist and the end that feels like a wrap of the whole series.
Although I fervently hope in a fifth season, in the eventuality of cancellation this episode would be a great ending to a phenomenal show.

5. “Metalhead” – Episode 5
The critic seems to agree in saying this episode didn’t feel part of the show. My friends didn’t like it, many say it’s the worst of the season. I’m glad to disagree.
It is true, I’ll give you that, it feels different from the other episodes, but I think it still resonates with the series. It was certainly not my favourite, but I truly admired Maxine Peake’s performance and really liked the ending. While many have said that it was silly and worth of an eye-roll, I considered that last shot a brilliant detail to make the viewer possibly reconsider the whole episode.
I’ll admit, though, that for someone who’s not a big fan of dystopian realities it could be hard to enjoy this episode.

6. “Crocodile” – Episode 3
This is probably the only episode I didn’t actually enjoy. I admired the direction and the shooting of the scenes – some of the best shots in the season in my opinion – but the story wasn’t compelling enough.
Despite growing tired of the episode towards the end, I found myself not wanting Mia to get caught. Her cold blood and genius in disposing of her friend’s body somehow got me attached to the character. I didn’t want to see her fail.
Despite oddly liking the protagonist, I can’t appreciate the eye-rolling ending.
This episode just didn’t deliver like Black Mirror usually does.

Season 5 has not been confirmed yet, but considering its popularity it’s hard to imagine the series being cancelled.